Top Class Responsive CSS Frameworks That Are Hard to Ignore

Most of the websites share same (not exactly identical) structure. And so, creating a site from scratch isn’t a sensible choice since it requires you to write code from the beginning. But, what if you can use a common structure to create a site? This is where a framework comes in handy.

A framework save you from re-doing the code for multiple websites of similar nature. Basically, a framework provide a common structure for building a site, saving developers from redoing the development task from scratch and even help them reuse the code. This eventually helps in saving a lot of time and efforts usually required for building a site.

A framework saves you from re-doing the code of multiple websites of similar nature. Basically, a framework provides a common structure for building a site, saving developers from redoing the development task from scratch and even help them reuse the code. This eventually helps in saving a lot of time and efforts, usually required for building a site.

4 Of the Best CSS Frameworks You Should Know About

Below are 4 most popular and widely used responsive CSS frameworks you should take a look at:

CSS pre-processing languages have become a popular choice among developers for developing CSS files, since they help in styling a CSS file with advanced. Additionally, such languages help in maintaining code within a CSS file in a relatively easy manner, and helps make CSS organized. So, if you’ve been planning on using CSS pre-processing, then the Twitter Bootstrap CSS framework is exactly what you need. It provides front-end developers with LESS files, enabling them to use CSS pre-processing.

The Bootstrap framework can be changed to a fixed grid layout or a responsive one, by making only a few changes. Besides, the framework comes bundled with plenty of features like 12-column responsive grid, typography, JS plugins, etc. that helps in building great responsive sites.

This is the perfect framework for novice developers, since it makes the process of developing responsive solutions a lot easier to learn and code. Its comprehensive documentation and detailed code examples will help you get expert training on building responsive design even faster.

If you’re working on a smaller project and would like to work with a lightweight CSS framework, then Skeleton is worth a try. Primarily designed to serve the mobile users’ needs, the Skeleton framework only includes lines of CSS code that are essential for making a site responsive. It comes packed with a 12-column fluid grid and only style a few HTML elements, but that’s enough to begin with a responsive website development project.

So, if you’re looking for an easy way to build your responsive site in a quick manner, and are ready to settle down with a few custom styles, then you should get started with working on your website development project using the Skeleton CSS framework. 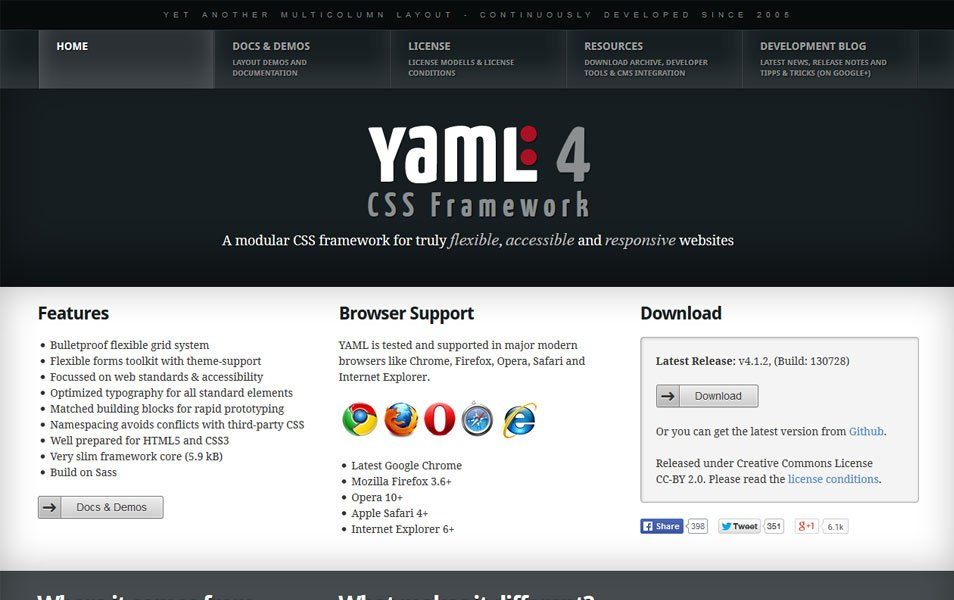 YAML (a.k.a Yet Another Multicolumn Layout) is one of the oldest CSS frameworks, and today has evolved into a mature and versatile framework that is being updated on a continuous basis. The version 4 of this modular framework is highly flexible and perfectly suited for developing responsive layouts.

YAML 4 is the most stable, responsive CSS framework that has been tested and supported in modern web browsers like Safari, Opera, Chrome, etc.

The rapidly growing popularity of responsive web design approach, which helps build sites that can adapt and adjust to any device screen size and resolution, has led to the rise of responsive frameworks. Such frameworks help solve the problem of turning a website design into a responsive one.

In a nutshell, a responsive CSS framework will help increase your development efficiency in building a site that can be accessed on the desktop, as well as, mobile browsers.

If you want many options for creating CSS files, then Twitter Bootstrap is the best fit for you as a CSS framework. However, if you don’t wish to use a full-featured framework, and want to kick-start your project quickly, then Skeleton is the right choice for you. In case, you would want to use a framework that can help you master the process of designing responsive designs, Foundation framework will best suit your needs. And if you would like to create highly flexible layouts, then the YAML framework is what you need.

How to Create Real-time Chat Application with Node.js Part 1